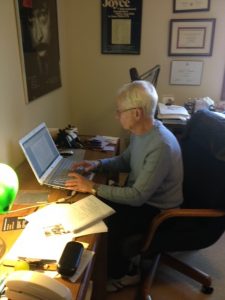 Because of my ambivalence about the internet, I’ve been reluctant to take this step. But given the many fascinating websites, blogs, and podcasts about film–some created by friends and colleagues who have encouraged and helped me–I’ve decided to join in. (See below for a list of other web addresses.) For the time being, I won’t be making frequent posts. This is a place where I can publish essays or lectures that haven’t appeared elsewhere, plus old journal articles, film reviews, and out-of-print books. Along with these things, I’ll include news, notes, recommendations, and (as with nearly all sites of this kind) advertisements for myself.

davidbordwell.net (frequent posts from a distinguished scholar, aesthetician, and master of the film blog, to whom I owe thanks for web advice)

flixwise.com/about-flixwise (knowledgeable, witty conversations about film with Pauline Lampert and an array of informed guests). An episode guide is found at http://flixwise.com/list-of-movies/

jonathanrosenbaum.net (writings on film by a world-class critic and scholar who has been my occasional collaborator and who gave me useful advice about the web)

josephmcbridefilm.com (news from a peerless writer, critic, and biographer)

rouge.com.au (Adrian Martin’s Australian web journal, which has attracted many of the best writers on film from around the world. See also Martin’s website: http://filmcritic.com.au)

sabzian.be (a beautifully designed and illustrated Belgian web journal named after a character in Kiarostami, with many intelligent essays and notes–an English version is available)

sensesofcinema.com (a longstanding Australian web journal, well worth perusing for its cornucopia of writings)

http://www.thecinephiliacs.net (Peter Labuza’s commentaries, together with interviews and discussions of specific films)